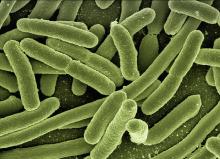 AOBiome Featured in Bloomberg Businessweek
It was a snowy week in February 2009 when David Whitlock packed up his three-bedroom apartment near Cambridge, Mass., and moved into his van. Then 54 years old, the inventor had spent all his money, almost half a million dollars, on worldwide patent filings for a newfound obsession: a type of bacteria, culled from soil samples, that he theorized would improve skin disorders, hypertension, and other health problems. “It was the most important thing I could work on,” Whitlock says. “But I knew I needed patents, otherwise I wouldn’t be able to get anyone interested.”

To make his white Dodge Grand Caravan habitable, Whitlock sawed down his queen-size bed frame and squeezed it in. He donated or abandoned most of his furniture, storing his lab equipment in a barn owned by his business partner, Walter “Hilly” Thompson. Then Whitlock drove to his former employer, cement company Titan America LLC, where he still had an office and did some consulting. Without asking permission, he pulled into the parking lot and made it home for the next four and a half years. “I found that if I stayed fully dressed and got inside two sleeping bags, I could tolerate it,” he says of the coldest winter nights.

Every so often, he would coat himself in a concoction made with his homegrown bacteria, a ritual he’d begun years earlier in the belief it would improve his overall health and all but eliminate the need to bathe or use soap. Then he’d spend the day in his office, tirelessly researching microbes. “A lot of people gave me shit for living in my car,” Whitlock says. “But it was like nothing, trivial.” His real problem was finding investors, a challenge exacerbated by his autism spectrum disorder. To get his message out, he relied mainly on Thompson. Most everyone dismissed the duo’s idea as nuts.
Today things look very different. Whitlock lives in an apartment, and his startup, AOBiome Therapeutics Inc., has raised almost $100 million. The company is seeking to become the first to get Food and Drug Administration approval for pharmaceutical-grade topical live bacteria, with six clinical trials under way to treat acne, eczema, rosacea, hay fever, hypertension, and migraines.

Mr. Knox comes to Assembly from Gilead Sciences where he most recently served as Vice President, Clinical Research and was responsible for global development programs in inflammation and viral hepatitis. In this capacity he oversaw development of the JAK1 inhibitor filgotinib for the treatment of rheumatic and inflammatory bowel diseases, led the development and registration of the Hepatitis C (HCV) therapies sofosbuvir (Sovaldi®) and sofosbuvir/ledipasvir (Harvoni®) and supported registration of the HBV therapy tenofovir alafenamide (Vemlidy®)1 throughout Asia including China and Japan. Mr. Knox brings 30 years of global product development experience from first in man through registration for biologics and small molecules. At Assembly, Steve will be responsible for advancing and expanding the HBV clinical development program and will work closely with the microbiome program as more products enter clinical development.

“I am excited to be joining Assembly as its clinical candidates move into later stage development and new candidates enter the clinic,” said Mr. Knox. “I’ve spent much of my career advancing therapies for viral hepatitis and while cures have been achievable in HCV, they have remained elusive in HBV, despite effective nucleos(t)ide therapy. I have followed Assembly’s development programs and believe there is great potential for core inhibitors to play an important role in bringing HBV to undetectable levels quickly and inhibiting generation of new cccDNA which may ultimately help bring about cure for more patients.”

Tags:
microbiome, AOBiome, Assembly Biosciences
Subscribe to our newsletter and receive articles like this and our industry news headlines in your email
admin
author's site